*Not Currently Playing In Las Vegas!
***
"An Evening With Marilyn * The Musical * Her Intimate Musical Self Portrait"®

On the one and only performance of her One Woman Musical on July 28th 1962 (fictional), "Marilyn" takes us on a journey of her life, from the time of her birth, to a week before her untimely death.
The story unfolds through Marilyn’s own words, the presentation of 136 rare and personal photographs and 24 beautiful songs, many taken from her various movies written by Gershwin, Styne, Arlen, Porter and others, sang and danced in Marilyn’s unique, playful, sweet and sensuous style, while wearing 7 exact replicas of her famous film costumes.  In “Un Evening…, we find a witty, intelligent, caring woman, who wants to set the record straight on her life, being orphaned, her yearning for motherhood, the men in her life, The Kennedys, and her unending quest for recognition as a serious and dedicated actress.
“An Intimate Musical Self Portrait of the Woman Behind the Image, Behind the Myth.”


A)   "An Evening With Marilyn * The Musical * Her Intimate Self Portrait"
This musical can be performed as a Two Act-'One Woman Musical Play'
Set on July 28TH 1962,
or
B)  It can also be performed with the addition of 2 to 6 male actors/singers/dancers;
and
C)  As two separate and independent 'one hour  musicals':

****  The songs will always be performed in English, as Marilyn originally sung them herself; however with advanced notice, there is a choice for the dialogue, french and spanish besides the original english version.
*Not currently Playing
In Las Vegas! 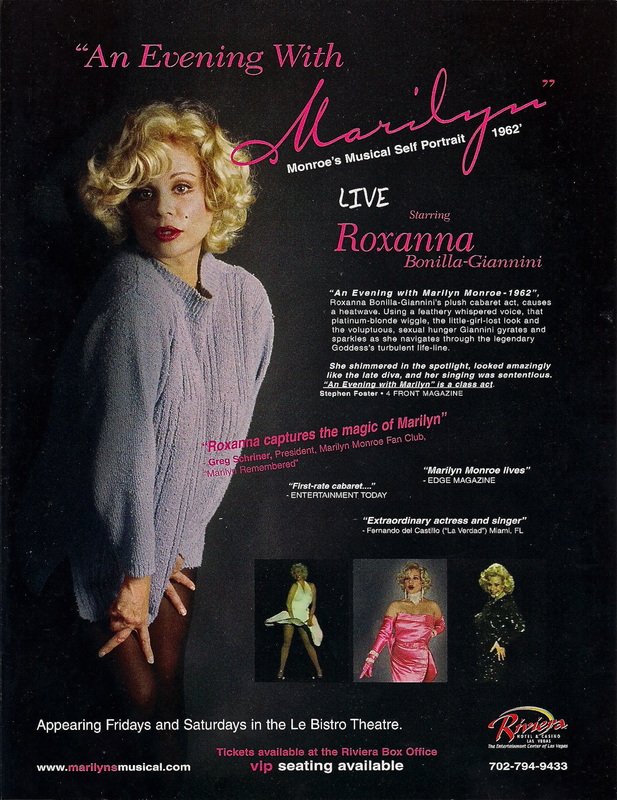