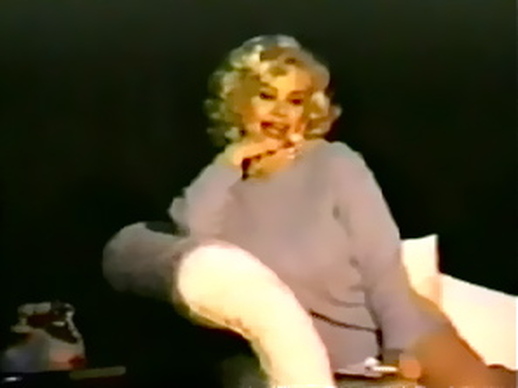 'A Live One Woman Musical Play in Two Acts'-Set on July 28TH, 1962
While living in Paris, I went to see Mr. Bernard Hilda in search of artistic representation.  After viewing 10 minutes of the debut of my first one-woman Musical, at the beautiful 'Cinegrill 'in the "Roosevelt Hotel" in Hollywood, California, he asked me if I would be interested in playing Marilyn Monroe in Paris.  His suggestion, at the same time, inspired and intrigued me.  I didn’t know much about 'Marilyn'.  Immediately in Paris I started my research into articles, books, and CD’s, (which I had no idea existed).  Then I continued my search for 'Marilyn' in Los Angeles.

The more I dug into 'Marilyn’s life, the more passionate I became in clearing the many misconceptions, that have been perpetrated about her.  It’s very easy to 'trash' a woman, any woman, especially one who cannot defend herself and has no family or anyone to stand for her.   Also something that weighted heavily in my decision to give her 'a voice' was that, in my “search for the truth” I found a documentary, where the assistant district attorney of Los Angeles, Mr. John Miner, who was present as 'Dr. Thomas Noguchi' did the post mortem examination on 'Marilyn’s body said that:  A.) No barbiturates were found in her liver or her stomach;  B.) Her blood showed traces of chloral hydrate, a potent sedative some 'call girls'  use to render their 'clients'  unconscious, and C.) Her lower intestine was very swollen, blue and purple, which indicated the 'Nembutal' had been administered through an enema.  I asked myself, if I wanted to commit suicide or have an 'accidental overdose', would I give myself an enema to end it all?  These findings gave me a strong indication of foul play and the possibility of homicide.  For me, it ruled out a suicide or accidental death by overdose.

I have become a true fan of this beautiful woman.  I've come to regard 'Marilyn' as a dear friend, a 'sister', a close member of my family, with whom I have more in common than I ever suspected.   I admire her for her compassion, her humanity and indomitable spirit in overcoming adversity; her tenacity in following her dreams and her wit; however perhaps her biggest triumph of all, is that of having become a perennial source of inspiration for future generations.  Her story has been told by thousands, and have made millions for many.  It’s time she told her story herself.   It’s time perhaps, we get to know 'the woman behind the image, behind the myth'.

I wrote, produced, directed and performed “An Evening With Marilyn-Her Intimate Musical Self Portrait", set on July 28th 1962, to show how happy she was at that point in her life, that 'Marilyn', was finally beginning to find her
true self and her happiness; that she  had no reason to end her promising future.  I did it for Norma Jean, the child and her dreams, the girl and her battles, and for the woman, who was finally ready for her future.
I created “An Evening…..”  for all women and for anyone, who at one time or another in their life, has been hastily labeled.  Unjustifiably misjudged by individuals driven by ill and malicious beliefs, based on ignorance, misconception and prejudice.
Roxanna Bonilla-Giannini
***
I would like to thank Mr. Bernard Hilda de "Consortium Artistique International (agence artistique) (depuis 1973),
in Paris',
For finding 'Marilyn' in me; for the challenge he gave me to continue growing, and 'opening my heart and mind' to new horizons and fresh possibilities, ready for greater opportunities in the future.